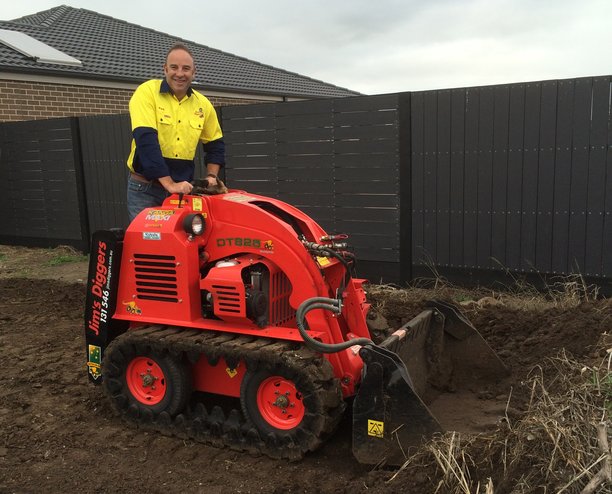 Paul has always been a glass half full person and his journey to becoming a Jims Diggers Franchisor is just one example. Prior to joining Jim’s Diggers Paul worked as an IT consultant, the last 8 years with Hewlett Packard (HP). In 2012 HP announced significant worldwide job cuts at the same time IBM and other major IT companies were doing the same. “The push to offshore skills and services was becoming more and more apparent in the years leading up to 2012” says Paul. In 2013 Paul got the ‘tap on the shoulder’ from HP but saw this as an opportunity to completely change the direction of his life. After analysing a number of existing businesses as well as other franchise models Paul settled on Jim’s Diggers. “I looked at a lot of businesses and was looking for something that could not be done cheaper offshore or imported. It was also very important that I had something that gave me flexibility with when I worked so I could still spend half of the school holidays and every second weekend with my 2 beautiful daughters”. “I looked at a lot of good existing businesses but all were under pressure from either cheap imports or the service being done cheaper offshore”. As Paul tells everyone who asks the question ‘why Jim’s Diggers?’ Paul always says “They haven’t worked out how to import a hole in the ground and I’m not sure they ever will”.

Paul completed his Jim’s Diggers training and induction in 2014 and began as Jim’s Diggers (Glen Iris) with a single Kanga skid steer loader. “I really enjoyed working outside and the personal contact with customers. Especially seeing the happy customers at the completion of a project well done. Something I never had in the IT industry”. Paul built his business up over the following 2 years then it got to a point where he could not handle the work on his own so was looking at a 2nd machine, tipper truck, and a full-time employee after having a casual operator working with him for the last 9 months.

At the same time though opportunity knocked. In the second half of 2015 Paul was offered the opportunity to purchase the master franchise rights for Victoria. Paul needed to decide whether to expand as a franchisee or step up to become a franchisor. “After talking to the other Jim’s Diggers franchisees in Victoria I was convinced that Jim’s Diggers would do better with a local and full-time franchisor” so with their support, took on the franchisor role and made the transition in January 2016.

In 2017 Paul was personally selected by Jim Penman to become the Jim’s Diggers Divisional Manager to not only continue to support his own franchisees but also support the other Jim’s Diggers Franchisors around Australia and their franchisees. A role Paul has enjoyed since taking on.

Outside of Jim’s Diggers Paul is also a keen sailor. Paul has completed in races and regattas up and down the East Coast of Australia. Most notably Paul has completed in every Rolex Sydney Hobart since 2003 except 1 and has come close, but not yet close enough, to ultimate victory achieving a 3rd overall in 2004 and a 2nd overall in 2014. “I enjoy the physical and mental challenge of ocean racing but even more, I enjoy the camaraderie and satisfaction of a job well done”. Paul said he gets similar enjoyment for the same reasons working with the other Jim’s Diggers franchisees, franchisors and customers.

want to be part of jim’s family?

We have a passion for customer service, and for this we need the best people. Our selection system rejects hundreds of potential Franchisees per year. We look for people with high standards who take pride in their work.

All over the World

Divisions to Choose From